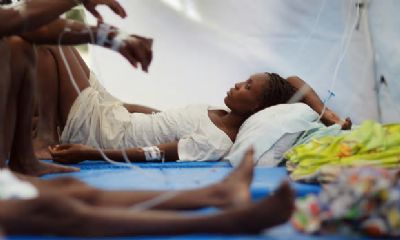 At least 30,000 people have died during the cholera outbreak after UN peacekeepers relocated from Nepal in 2010 brought the bacterium with them. (Joe Raedle/Getty Images)
"A bipartisan group of 158 members of Congress has accused the Obama administration of a failure of leadership over the cholera scandal in Haiti in which at least 30,000 people have died as a result of an epidemic caused by the United Nations for which the world body refuses to accept responsibility.

A joint letter highly critical of US policy â and devastatingly critical of the UN â has been sent to the US secretary of state, John Kerry, signed by 12 Republican and 146 Democratic members of Congress. Led by John Conyers, a Democratic congressman from Michigan, and Mia Love, a Republican congresswoman from Utah, the letter's signatories include many of the most senior voices on foreign affairs on Capitol Hill.

The missive takes the Obama administration to task for failing to admonish the UN for its refusal to accept responsibility for the cholera outbreak. 'We are deeply concerned that the State Department's failure to take more leadership in the diplomatic realm might be perceived by our constituents and the world as a limited commitment to an accountable and credible UN,' the letter says...

Cholera erupted in Haiti in October 2010, after the bacterium was brought to the country by UN peacekeepers relocated from Nepal to help with disaster relief in the wake of the January earthquake. The joint letter to Kerry mentions a report by the UN itself carried out in 2010 and leaked recently to the Guardian, which showed that the world body was fully aware that sewage at its peacekeeping bases was being dumped in the open, well after cholera was first detected.

The Congress members are excoriating about the UN's conduct in the wake of the disaster. They note in their letter that the official death toll is almost 10,000, but the reality might be three to 10 times higher, making the Haiti outbreak the worst cholera epidemic of modern times..."
Date
June 29, 2016
Title
Congress Faults Obama for Not Being Tough with UN Over Haiti’s Cholera Crisis, The Guardian
Author(s)
Ed Pilkington
Original Source
https://www.theguardian.com/world/2016/jun/29/us-congress-haiti-cholera-united-nations-obama-administration
Attachment
Click here to view this article in MS Word/PDF format