Presidential Candidates Should Pledge to End the UN's Onslaught Against Israel 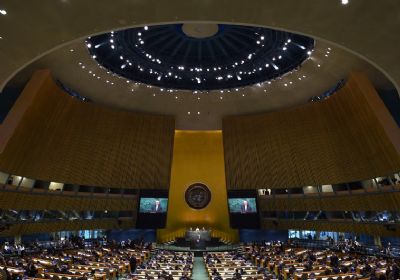 The UN General Assembly (File photo)
"The America Israel Friendship League (AIFL), a non-profit, non-political organization of which I am chairman, has long been concerned with the growing anti-Israel activity at the United Nations.

Statements from the secretary general, in addition to resolutions and reports issued through the UN's various institutes and branches..., as well as in many official statements issued on behalf of several of its member states, show blind disregard.

The United States' friendship with Israel transcends political differences, and with the upcoming presidential elections, the AIFL will call upon the presidential candidates of both parties to publicly pledge that under their presidency:

â¢ The United States will seek to ensure that the UN will cease and desist discriminatory actions against the only democracy in the Middle East and the only Jewish state in the world.

â¢ The United States will decisively stand by the State of Israel in its continuous fight against those who seek to destroy the Jewish state at the UN and at its various institutions."
Date
August 8, 2016
Title
Presidential Candidates Should Pledge to End the UN’s Onslaught Against Israel, The Jerusalem Post
Author(s)
Kenneth J. Bialkin
Original Source
http://www.jpost.com/Opinion/Presidential-candidates-should-pledge-to-end-the-UNs-onslaught-against-Israel-463580
Attachment
Click here to view this article in MS Word/PDF format