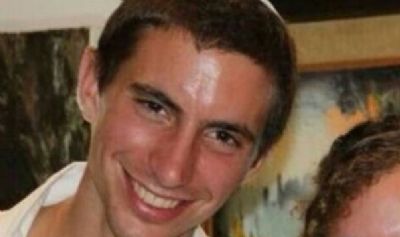 Lt. Hadar Goldin, 23 from Kfar Saba, killed in Gaza on August 1, 2014. (AP Photo/ Ynet News)
"The drawings of Hadar Goldin, an Israeli soldier who was killed by Hamas in Gaza where his body is being held, will be exhibited at UN headquarters in New York.

A main exhibition area of the building will display the drawings during the General Assembly in September.

Goldin's parents, Leah and Simcha of Kfar Saba, and his twin brother, Tzur, will attend the exhibit's opening at the United Nations with Israeli Prime Minister Benjamin Netanyahu, who will speak before the General Assembly...

Goldin's unit was attacked during a failed cease-fire initiated by the United Nations. He was killed and his remains are held by Hamas...

The Goldins have traveled to the United States three times in their attempt, thus far unsuccessful, to meet with UN Secretary-General Ban Ki-moon and lobby for the return of their son's body.

Israel's UN ambassador, Danny Danon, is working with the world body's officials and representatives from various countries to arrange diplomatic meetings for the Goldins aimed at ensuring the return of the remains of Goldin and Sgt. Oron Shaul, whose remains also are held by Hamas, for burial in Israel..."
Date
August 23, 2016
Title
UN to exhibit drawings by soldier whose body is held in Gaza, Times of Israel
Author(s)
JTA
Original Source
http://www.timesofisrael.com/un-to-exhibit-drawings-by-soldier-whose-body-is-held-in-gaza/?utm_source=The+Times+of+Israel+Daily+Edition&utm_campaign=54066d377b-2016_08_23&utm_medium=email&utm_term=0_adb46cec92-54066d377b-54696109
Attachment
Click here to view this article in MS Word/PDF format