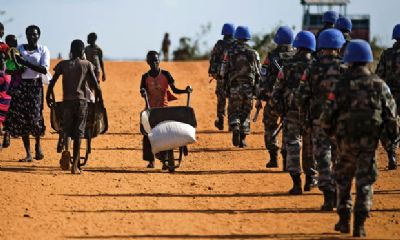 Chinese UN peacekeepers in the capital Juba 'abandoned their posts entirely' at one civilian protection site where tens of thousands had sought safety from successive bouts of fighting, a report by the US-based Centre for Civilians in Conflict (Civic) said...

The failures came amid clashes in Juba between troops from the government's Sudan People's Liberation Army (SPLA), loyal to the president Salva Kiir, and opposition forces of his rival Riek Machar. The street battles, in which scores were killed, were the culmination of months of tension between the two factions, and resulted in the flight of Machar from South Sudan.

The Chinese troops subsequently abandoned their posts, leaving weapons and ammunition behind, the report said...