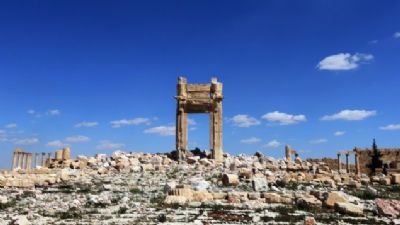 Speaking at the opening of the new IAA headquarters in Jerusalem, director Yisrael Hasson said the resolution adopted last week and confirmed on Tuesday put the UN organization in the same league as IS jihadists who have destroyed and looted hundreds of archaeological sites in Syria and Iraq to fund their 'caliphate.'

'Around us, world heritage treasures are being destroyed... They murdered Syrian archaeologist Khaled al-Asaad, who tried to protect heritage,' Hasson said recalling the 82-year-old retired head of antiquities in Palmyra who was beheaded by IS militants last year.

IS overran Palmyra - a UNESCO world heritage site known as the 'Pearl of the Desert' - in May 2015 and used its ancient amphitheater for public executions...