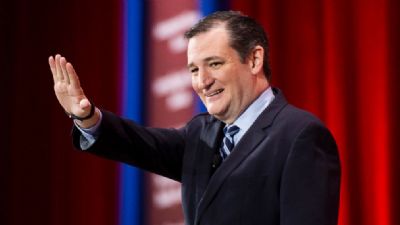 Senator Ted Cruz.
"A demonstration of moral courage occurred two weeks ago in a most unlikely place: the UNESCO Executive Board meeting in Paris. During a contentious vote on the "Occupied Palestine" resolution, Mexico's Ambassador to UNESCO walked out. AndrÃ©s Roemer reportedly decided he could not support a resolution that attempts to expunge thousands of years of Jerusalem's Jewish identity.

His audacity cost him his job-but it also focused attention on this resolution. Mexico decided to change its stance to abstention and intended to call for a re-vote to formally withdraw support. Brazil also indicated it had serious reservations and UNESCO Director-General Irina Bokova and Chairman of the Board Michael Worbs voiced concerns, raising hopes that another vote would allow countries to reconsider their support, or that final passage would be delayed. Italy's Prime Minister subsequently criticized the text and added his country would encourage other European colleagues to oppose such measures in the future.

Last Wednesday morning that opportunity could have arisen. But then 'western countries' lobbied against the second vote on the grounds other resolutions passed by consensus might be re-opened, and the resolution passed. While the identity of these western countries is not yet known, we do know that at the very least the United States did not actively lobby for the re-vote. In other words, when given an unprecedented opportunity to rally support for Israel at UNESCO as nations that have voted reflexively in support of the Palestinians shifted their positions, America chose to look the other way.

The Obama administration has attempted to explain that America was powerless to prevent the resolution's passage because our laws have prohibited funding to UNESCO after it accepted 'Palestine' as a member in 2011, and that the solution is to restore funding. But other UN entities have not followed UNESCO's lead because they disagree on the Palestinian issue, but rather because they fear the loss of the US taxpayer dollars that pay their salaries-leverage America can and should exploit. Additionally, support for the Palestinians no longer seems to be an article of faith for a number of countries such as Mexico and Brazil, not to mention our NATO ally Italy, and they now might be inclined to join with the US in supporting Israel.

But this is not an opportunity the Obama administration appears interested in seizing. The President's Jerusalem policy was made clear a few weeks ago when the White House issued a "corrected" version of Mr. Obama's remarks at Simon Peres' funeral on Mount Herzl, site of Israel's national cemetery and Yad Vashem Holocaust memorial, the correction being to cross out "Israel" after 'Jerusalem' in the header identifying the location of the ceremony. It was of paramount importance to make the point that the American President does not consider Mount Herzl-and so Jerusalem-sovereign Israeli territory.

This rather clumsy attempt to erase Israel seems a tactic better suited to the Islamic Republic of Iran than the United States of America, and it is evidence that the Obama administration is not done with the Jewish state. And as it has been so often over its millennia of history, Jerusalem is going to be ground zero."
Date
October 24, 2016
Title
America’s missed UNESCO opportunity, The Washington Times
Author(s)
Senator Ted Cruz
Original Source
http://www.washingtontimes.com/news/2016/oct/24/americas-missed-unesco-opportunity/
Attachment
Click here to view this article in MS Word/PDF format