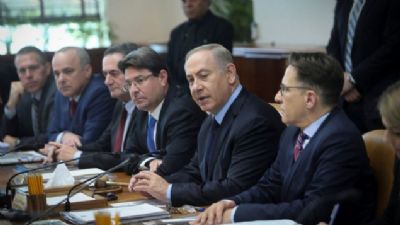 Netanyahu told his weekly cabinet meeting that Israel is 'in the midst of an event that has still not ended,' according to a report by Israel's Channel 10 news.

White House Deputy National Security Adviser Ben Rhodes said last week that the US would veto any further UN action against Israel, after Washington abstained last month and allowed a resolution critical of West Bank settlement building to pass, drawing fury in Jerusalem at the US and the Security Council's other 14 nations.

The Security Council meeting is scheduled to take place just two days after a planned peace conference in Paris on January 15, which Israel says may be used to advance further measures against it after the UN Security Council resolution and US Secretary of State John Kerry's speech last week in which he condemned Israel's 'pernicious policy of settlement construction that is making peace impossible' and laid out his six principles for peace talks.

Although it was not specified what kind of additional action Netanyahu believes could be taken against Israel at the Security Council, Channel 10 reported last week that the prime minister thinks the Middle East Quartet - the US, UN, Russia and EU - will coordinate positions at the Paris summit, and then return to the Security Council in the very last days of Obama's presidency to cement these new parameters on Mideast peacemaking..."
Date
January 1, 2017
Title
Netanyahu Said to Warn of More Anti-Israel UN Activity, The Times of Israel
Original Source
http://www.timesofisrael.com/netanyahu-said-to-warn-of-more-anti-israel-un-activity/\
Attachment
Click here to view this article in MS Word/PDF format