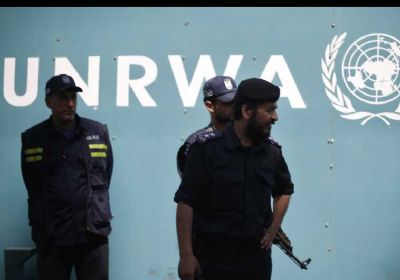 According to a new report..., textbooks used in schools run by the United Nations Relief and Works Agency for Palestine Refugees in the Near East (UNRWA) removed references to Jewish municipalities in Israel, described Zionism as a foreign 'colonial movement' and denied the historical and religious connections between Jews and Israel.

The new revelation of a UN agency's connection with anti-Zionism came on the heels of the controversial UN Security Council resolution condemning Israeli settlements.

The resolution stated that eastern Jerusalem - including Jewish holy sites such as the Western Wall - is 'occupied Palestinian territory.'

'This is just the latest example of anti-Israel incitement under the auspices of the United Nations,' Danon said of the UNRWA development. 'These textbooks refer to Tel Aviv as 'Tel al-Rabia' and the holy Western Wall and the Cave of the Patriarchs are portrayed as Muslim sites that the Jewish people are seeking to take control of. This is not how you make peace in the Middle East. This is how you raise another generation full of hatred and ready to use violence.'..."
Date
January 5, 2017
Title
Israel’s UN Ambassador Slams Denial of Jewish State in International Body’s School Books for Palestinian Refugees, The Algemeiner
Author(s)
JNS.org
Original Source
https://www.algemeiner.com/2017/01/05/israels-un-ambassador-slams-denial-of-jewish-state-in-international-bodys-school-books-for-palestinian-refugees/
Attachment
Click here to view this article in MS Word/PDF format