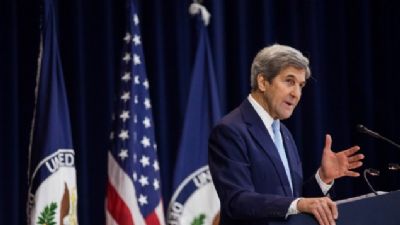 Secretary of State John Kerry
"The Obama administration has one week to hand over all documents involving a United Nations resolution critical of Israel to a congressional committee, amid allegations from Israeli officials that the administration worked behind the scenes to pass the resolution.

A Monday letter to Secretary of State John Kerry from the House Committee on Oversight and Government Reform requests that Kerry provide all communications related to the December U.N. resolution, which describes the West Bank and east Jerusalem as occupied Palestinian territory and declares Israeli construction there illegal. The administration abstained from voting on the resolution, allowing its passage.

'Recent press reports raise questions whether the United States secretly played a role in organizing, advancing, or supporting this resolution,' read the letter. 'To help the Committee understand why the U.S. allowed Resolution 2234 to pass and so we can assess the facts and circumstances related to U.S. involvement in the vote, please provide all documents and communications referring to relating to Resolution 2334 as soon as possible, but no later than 5:00 pm on January 17, 2017.'...

The House letter, in addition to requesting documents, describes the administration's abstention as a divergence from U.S. policy toward Israel at the United Nations.