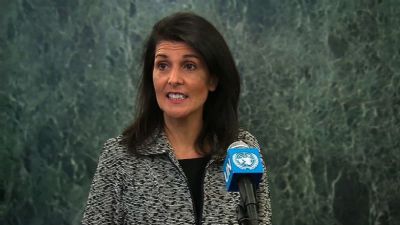 U.S. Ambassador to the UN Nikki Haley (File photo)
"Israeli Prime Minister Benjamin Netanyahu and President Trump made waves in their first meeting Wednesday, shifting decades of U.S. policy as Mr. Trump opined that either a one-state or two-state solution would be just fine, saying he could 'live with either one.'...

What hasn't changed much, both leaders agree, is the reset needed at the United Nations.

In charge of that shift is the president's U.N. envoy, Ambassador Nikki Haley, who made clear in her testimony at her Senate confirmation hearing that she won't be going to the U.N. to 'abstain when the U.N. seeks to create an international environment that encourages boycotts of Israel.'

The U.N.'s anti-Israel bias came into the spotlight just before President Obama left office, when the U.S. changed decades of policy by allowing a U.N. Security Council resolution to pass that called for an immediate halt to settlement building in occupied Palestinian territory, and said those settlements have no legal validity...

Geneva-based Human Rights Council, headed by U.N. High Commissioner for Human Rights Zeid Ra'ad al-Hussein, was expected to publish a database of companies that do business with Israel in settlements in the West Bank, East Jerusalem and the Golan Heights, a move that was created by a Council resolution passed last March.

Danon tweeted, 'We had hoped that the dark days when Jewish business could be blacklisted & boycotted ... had passed.'

The database wasn't published, though, because the U.S., as a member of the Council, got several member states to persuade the Council to hold off on publishing for now..."
Date
February 16, 2017
Title
Nikki Haley’s U.N. Mission: Sticking Up for Israel, CBS News
Author(s)
Pamela Falk
Original Source
http://www.cbsnews.com/news/nikki-haleys-un-mission-sticking-up-for-israel/
Attachment
Click here to view this article in MS Word/PDF format