Nikki Haley: Why is UN Talking About Israel Instead of Syria, Iran, North Korea? 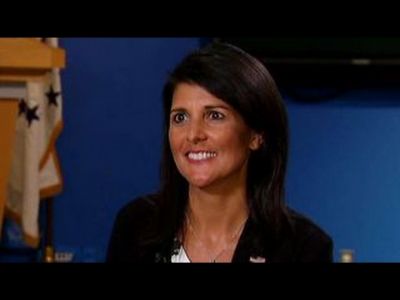 "I think the biggest surprise has been, truly, the anti-Israel bias. To go in and think that every single month, they have a briefing on the Middle East, but they're not talking about the issues we would care about. They're not talking about Syria, they're not talking about Iran, they're not talking about North Korea. What they are talking about is Israel. Every single month, for ten years, they've been Israel-bashing. And that was something that, I just couldn't believe they put the time and energy into doing that when we have so many threats around the world...So, things are happening, and it's changing, and the tone is getting better. People suddenly realize we do have more important things to do, and not only that, I think they're tired of me yelling at them about Israel-bashing."
Date
April 1, 2017
Title
Eric Shawn reports: U.S. Amb. Haley speaks out on the U.N., Fox News
Original Source
http://video.foxnews.com/v/5382633376001/?#sp=show-clips
Attachment
Click here to view this article in MS Word/PDF format