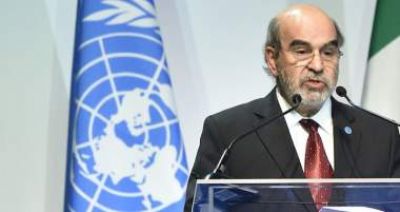 Head of the UN Food and Agriculture Organization, JosÃ© Graziano da Silva (File photo)
"The United Nations war on the free press and whistleblowers continues to escalate. After a UN 'court' tried to put a journalist in jail, among other brazen attacks on media freedom, a UN agency is now abusing the Italian legal system to pursue criminal charges and crippling damages against a local newspaper and its editor. The supposed 'crime': allegedly damaging the reputation of the UN Food and Agriculture Organization (FAO) through articles exposing corruption, lawlessness, cronyism, and nepotism within the Rome-based UN agency. It is hardly the first time the UN has sought to silence the press.

The scandal-plagued UN 'food' bureaucracy, though, is already under fire from top U.S. officials and lawmakers. And the bizarre scheme to silence critics and journalists using taxpayer money is likely to pour fuel on the fire - especially as the UN comes under growing criticism for its anti-press freedom antics. Making matters worse for UN agency bosses is the fact that the additional international scrutiny on this case may lead to exposing further corruption. Most alarming, perhaps, are the increasingly obvious links between the UN agency boss in question and a totalitarian Latin American network of criminals and communists.

The controversial case, which could end up shutting down the English-language Italian Insider publication, has been in the courts since 2015. Under archaic Italian laws, criminal charges can be sought in defamation cases, and truth is not necessarily a defense. And so, a collection of top UN FAO bureaucrats, apparently sensing an opportunity to shut down critics and investigative journalists, abused the fascist-era statute to accuse the newspaper and its chief editor John Phillips of carrying out a 'criminal design' to defame the UN FAO and its leadership. The accusations stem from a series of articles exposing malfeasance, apparent corruption, and other scandals at the UN agency..."
Date
April 5, 2017
Title
UN Seeks Criminal Charges Against Editor for His Reporting, The New American
Author(s)
Alex Newman
Original Source
https://www.thenewamerican.com/world-news/europe/item/25769-un-seeks-criminal-charges-against-editor-for-his-reporting
Attachment
Click here to view this article in MS Word/PDF format