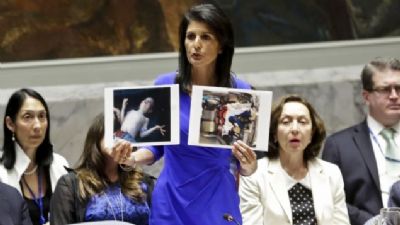 US Ambassador to the UN Nikki Haley showing pictures of Syrian victims of chemical attacks to the Security Council, April 5, 2017 (AP)
"Seeking to avert a clash between Russia and the West, 10 Security Council countries on Thursday circulated a compromise resolution demanding a full investigation of the suspected chemical attack in Syria, diplomats said.

The new text - the third now before the council on investigating the apparent gas attack - was presented ahead of a closed-door meeting of the 15-member council on Syria at 6:30 pm (2230 GMT).

It remained unclear if Russia or the other four permanent council members would back the compromise presented as the United States was weighing military options in Syria...

Their compromise text would drop demands that Syria hand over information on its military operations on the day of the strike, replacing them with language from a previous resolution urging cooperation on chemical weapons investigations, diplomats said...

Russia has rejected the proposed Western-backed resolution as 'categorically unacceptable' and put forward a rival draft that does not include specific demands that the Syrian government cooperate with an investigation.

The Russian text calls for an investigation but requests that the council approve the makeup of the team from the Organization for the Prohibition of Chemical Weapons (OPCW) dispatched to Idlib..."
Date
April 7, 2017
Title
UN Council Weighs Compromise on Syria Nerve Gas Probe, The Times of Israel
Author(s)
AFP
Original Source
http://www.timesofisrael.com/un-council-weighs-compromise-on-syria-nerve-gas-probe/
Attachment
Click here to view this article in MS Word/PDF format