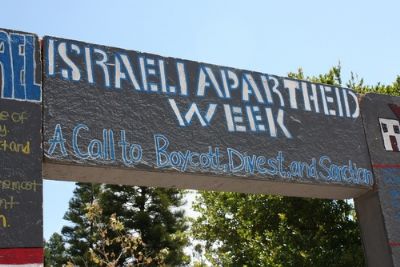 "While violent incidents of antisemitism dropped 12% worldwide in 2016, US campuses saw a surge of 45% in antisemitism, according to data released Sunday.

The Kantor Center for the Study of Contemporary European Jewry at Tel Aviv University in collaboration with the European Jewish Congress released its Annual Report on Antisemitism for 2016 during a press conference held at the university...

One of the most startling findings is a 45% increase in antisemitism on US campuses, which the report stated have become a hot-bed for antisemitism, often under the guise of anti-Zionism and due to increased pro-Palestinian movements, such as BDS on campuses.

Dr. Moshe Kantor, president of the European Jewish Congress, commented on the findings, and said that while there was a substantial decrease in violent attacks against Jews, the motivation has not dropped, as witnessed by an increase in attacks on less protected arenas like online, university campuses and cemeteries.

'While the number of antisemitic incidents, especially violent ones, has decreased worldwide in 2016, the enemies of the Jewish people have found new avenues to express their antisemitism - with significant increase of hate online and against less protected targets like cemeteries,' he said via a pre-recorded video message at the press conference. 'This means that in fact, the motivation has not declined and the sense of security felt by many Jewish communities remains fragile.'...

The report cited a recent study conducted by the World Jewish Congress which found that an antisemitic message was posted every 83 seconds worldwide in 2016, the majority on Twitter.

'Hate against Jews is not really dropping,' Kantor emphasized, saying that it has just moved into the virtual world where enforcement is lacking...

The report also warned that antisemitism should no longer be seen as the main purview of the far-Right, and that while violent incidents by the extreme-Left remained low, verbal antisemitism and anti-Zionism remained vehement.

'We are now witnessing that the targeting of Jews is no longer the sole domain of the far-Right. The far-Left are now using the same messages, tactics and agenda,' Dr. Kantor said. 'Indeed, some who describe themselves as liberal and progressive, are in league with the most regressive movements, ideologies and regimes.'"
Date
April 23, 2017
Title
Report: Global Antisemitism Drops 12%, but Surges by 45% on US Campuses, The Jerusalem Post
Author(s)
Lidar GravÃ©-Lazi
Original Source
http://www.jpost.com/Diaspora/Report-Global-antisemitism-drops-12-percent-but-surges-by-45-percent-on-US-campuses-488709
Attachment
Click here to view this article in MS Word/PDF format