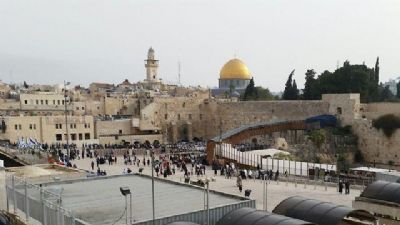 The Western Wall in Jerusalem
"The United Nations Educational, Scientific and Cultural Organization (UNESCO) is set to vote on Tuesday, Israel's Independence Day, on a resolution that comes out against Israeli sovereignty over Jerusalem.

Israel's embassies in the 58 countries that make up the organization's executive board and the Israeli Foreign Ministry are working to convince as many countries as possible to vote against the resolution, but it is likely to pass regardless due to the automatic majority Arab nations have.

The administration of US President Donald Trump is also working to pressure UNESCO and the member nations to postpone the vote or alternatively oppose it.

Last year, UNESCO passed a resolution that failed to acknowledge Jewish ties to the Temple Mount by omitting the holy site's Jewish name and referring to it only by its Muslim name-Al-Haram Al Sharif. Only six countries voted against the resolution, and Israel hopes this year more will vote against.

The draft resolution was initially submitted in March by Algeria, Egypt, Lebanon, Morocco, Oman, Qatar and Sudan on behalf of the Palestinians. A new draft set to replace the March one was co-authored by European countries.

This draft resolution does not include the article concerning Jewish ties to the Temple Mount, but includes a new article that comes out against Israeli sovereignty over Greater Jerusalem-not merely rejecting Israel's sovereignty in east Jerusalem and the Old City, but the entire city..."
Date
April 27, 2017
Title
UNESCO Set to Vote on Resolution Rejecting Israeli Sovereignty Over Jerusalem, YNet News.com
Author(s)
Itamar Eichner
Original Source
http://www.ynetnews.com/articles/0,7340,L-4954749,00.html
Attachment
Click here to view this article in MS Word/PDF format