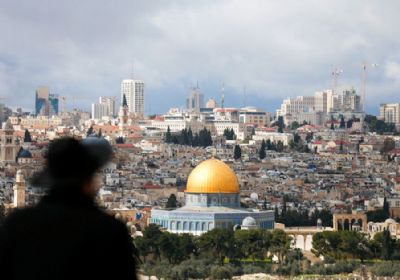 The Temple Mount in Jerusalem
"The cabinet on Sunday debated whether to oust the United Nations from its Jerusalem headquarters, but it did not take any action on the matter at this time.

The Foreign Ministry gave the ministers a presentation on the matter, including legal and diplomatic impediments to the move.

The issue was put on the agenda after Culture and Sports Minister Miri Regev (Likud) called on the government to take action against the UN in response to the UNESCO Executive Board's vote in Paris last Tuesday that passed a resolution disavowing Israeli sovereignty in Jerusalem.

The UN compound was placed in Armon Hanatziv in 1948, because the site was then strategically located between the eastern and western parts of the city.

From that demilitarized location, the UN could monitor the truce between Jordan and Israel.

Last week, Regev told Channel 2: 'We've been sovereign in the city for 50 years, so there is no need for UN monitors. They were given use of the compound to oversee the cease-fire agreement from the Six Day War. It's an agreement that is no longer relevant. This saga has to end.'..."
Date
May 7, 2017
Title
Israel to Debate Ousting UN from Jerusalem Headquarters, The Jerusalem Post
Author(s)
Tovah Lazaroff
Original Source
http://www.jpost.com/Israel-News/Politics-And-Diplomacy/Israel-to-debate-ousting-UN-from-Jerusalem-headquarters-489954
Attachment
Click here to view this article in MS Word/PDF format