UNESCO: Adding More Fuel to the Fire of Hatred 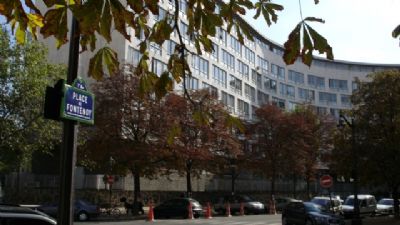 UNESCO Headquarters, Paris
"There is no cause for celebration, as there was and remains an unenlightened majority in the United Nations Educational, Scientific and Cultural Organization (UNESCO), as well as in all other UN institutions. Tuesday's vote, on Israel's Independence Day of all days, is part of a war of attrition waged by the Muslim world against Israel. A diplomatic jihad. These may be false resolutions with no real meaning, but with one resolution after another-the attrition is working...

The fundamental problem of the international institutions was and remains that they are all dominated by an unenlightened, automatic majority of undemocratic states. When we say 'the international community,' we are actually saying 'the unenlightened majority of the international community.' It's sad, because points of friction and conflict needs a serious international body-and that doesn't exist. This body has deserted itself to a majority which led, for example, to the election of Saudi Arabia to the women's rights commission of the UN's Human Rights Council, or which made the World Health Organization find the time-in the height of the civil war in Syria-to condemn Israel about something that had to do with the Golan Heights. Is there anyone among the residents of bleeding Syria who wouldn't want to live under Israeli rule in the Golan Heights? But to hell with the facts, as long as there is a majority for adopting more resolutions against Israel.

Although resolutions like the one adopted on Tuesday have no practical validity, it's hard to ignore their cumulative effect, including on the international public opinion. When newspapers in Europe report these resolutions, they fail to mention that these are foolish resolutions initiated by an unenlightened majority. And if they do include something in this spirit, it appears at the end of the report. This is how false consciousness is created in the free world. This is how Israel is turned into a condemned country. This is how different surveys produce the result that Israel is the country threatening world peace.

At the end of the day, the diplomatic jihad is scoring achievements. We should not, therefore, rest on our laurels just because the resolution adopted on Tuesday was not as bad as the one we expected. There is cumulative damage here, and on Tuesday UNESCO added more fuel to the fire of hatred."
Date
May 5, 2017
Title
Adding More Fuel to the Fire of Hatred, YNet News
Author(s)
Ben-Dror Yemini
Original Source
http://www.ynetnews.com/articles/0,7340,L-4956788,00.html
Attachment
Click here to view this article in MS Word/PDF format