'The UN is no longer the Palestinians' playground' 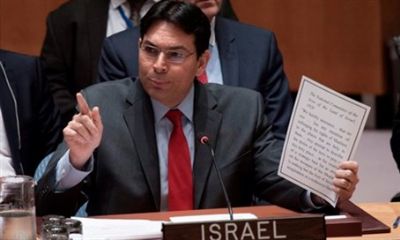 'There's a new spirit in Washington which is coming to the UN headquarters. You feel this change in the discussions as well. They no longer focus only on Israel. The UN is no longer the Palestinian playground. Something is changing here,' he said.

As for Trump's upcoming visit to Israel, Danon added, 'We are very optimistic that it will be a successful visit that will convey a message to the world that the U.S. stands with Israel.'

Since taking office, Haley has made it a priority to stop the anti-Israel bias at the UN. Most recently, she urged the UN Security Council to devote less attention to the Arab-Israeli conflict and make Iran's 'incredibly destructive' activities a priority in the Middle East."
Date
May 8, 2017
Title
‘The UN is no longer the Palestinians’ playground’, Arutz Sheva
Author(s)
Eliran Aharon
Original Source
http://www.israelnationalnews.com/News/News.aspx/229266
Attachment
Click here to view this article in MS Word/PDF format