It Could Get Worse: Israel Frets 'Islamic Troika' May Take Helm at UNESCO 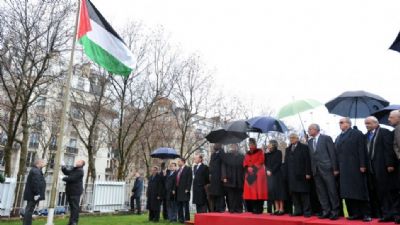 Raising of the Palestinian flag outside UNESCO Headquarters, December 2011
"Israel's relationship with UNESCO is complicated, to say the least. But later this year, the organization will elect a new leadership, and officials in Jerusalem are fretting over a possible 'Islamic troika' in three key jobs who would seek to further advance the UN cultural organization's anti-Israel agenda.

Of the nine people vying to succeed Irina Bokova as director-general of the United Nations Educational, Scientific and Cultural Organization, four hail from Arab states and one of them - a Qatar minister - is considered a frontrunner.

The leading contenders for the post of chairman of UNESCO's General Conference hail from Saudi Arabia and Morocco, according to Israel's ambassador to the organization, Carmel Shama-Hacohen.

And the sole candidate to head the UNESCO Executive Board is from Iran.

'Under certain circumstances an Islamic troika could be created, which would be liable to push the organization to new depths of anti-Israel politicization,' warned Shama-Hacohen..."
Date
May 9, 2017
Title
It Could Get Worse: Israel Frets ‘Islamic Troika’ May Take Helm at UNESCO, The Times of Israel
Author(s)
Raphael Ahren
Original Source
http://www.timesofisrael.com/it-could-get-worse-israel-frets-islamic-troika-may-take-helm-at-unesco/
Attachment
Click here to view this article in MS Word/PDF format