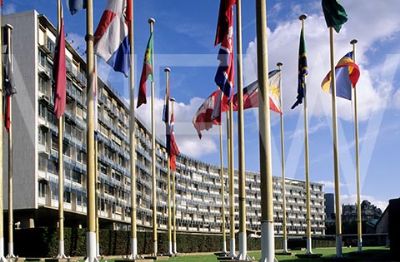 UNESCO Headquarters, Paris
"There is something severely wrong when an international organization that claims to be inclusive and humanitarian turns around and slaps a lone democracy in the face by denying its rightful claim to its capital city. As if the world needed more proof of the UN's blatant and unabashed contempt for the Jewish state, UNESCO's latest resolution denying Israel's ties to Jerusalem is perhaps its most egregious declaration since the UN condemned Israel for its alleged occupation of the West Bank and Gaza.

What's even more outrageous is the concurrence by which the UNESCO resolution was met: never mind the 23 abstentions or the 10 oppositions, but 22 nations voted to disregard history, truth and basic theological study in order to attack the single democracy in the Middle East - a region that is little more than an abyss of hatred, intolerance and terrorism.

In stark contrast to Western ethics and values, the Middle East is an expanse of violence and oppression. Iran, Iraq, Syria and Saudi Arabia have committed a myriad of crimes against humanity, yet Israel, the one free, democratic country surrounded by 40 of these virulent nations, is the only one singled out for condemnation. In fact, Israel isn't even allowed to lay claim to its capital city without facing international outcry and delegitimization...

At present, the UN and its subcommittees are nothing more than outlets for antisemitism and anti-Zionism. UNESCO should be ashamed of itself for perpetuating the unjustifiable odium aimed at the Jewish state, and every nation that voted in favor of this fallacious resolution is equally at fault for supporting such abhorrent policies. Once again, the UN has revealed itself to be a sham of an organization centered on hatred and spite, and a pox upon the peaceful and tolerant nations of the world who are actually working towards progress and prosperity."
Date
May 9, 2017
Title
UNESCO’s Betrayal of Truth, History and Justice, The Algemeiner
Author(s)
Harry Dardashti
Original Source
https://www.algemeiner.com/2017/05/09/unescos-betrayal-of-truth-history-and-justice/
Attachment
Click here to view this article in MS Word/PDF format