This is How UNRWA Students are Taught to Destroy Israel 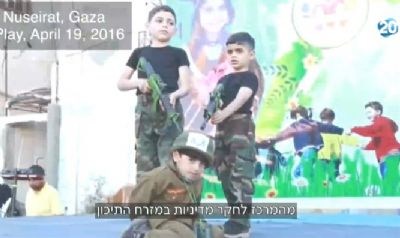 "Special footage received by Channel 20 from the Center for Near East Policy Research gives viewers a glimpse into the classrooms and hallways of UNRWA schools.

'I am in favor of stabbing attacks, because they scare Jews,' Ahmad Diamiya, a student at an UNRWA school, told his interviewer.

'We are fighting the Jews so we can get our land back, and we fight using terror attacks such as stabbing, ramming, shooting, and stone throwing,' another student said.

Mohammed Qashur of Jerusalem's Shuafat neighborhood said, 'I am in favor of stabbing attacks, and I support anyone who stabs them (the Jews). I am thinking of stabbing them, and I want to be a halal (shahid).'

In UNRWA's Lata school, near Shechem (Nablus), the teacher can be seen indoctrinating the children on the subject of "Palestine's" ideal future borders - which do not include a place for Israel.

Leading the students in a chant, the teacher says, and the students repeat after her, 'Arab Palestine from river to sea!" and "Return Haifa and Akko (Acre)!'"
Date
May 10, 2017
Title
This is How Arabs Teach Their Children to Destroy Israel, Arutz Sheva
Original Source
http://www.israelnationalnews.com/News/News.aspx/229434v
Attachment
Click here to view this article in MS Word/PDF format