'Palestine' Will Be There, But Taiwan Faces Exclusion From Annual UN Health Assembly 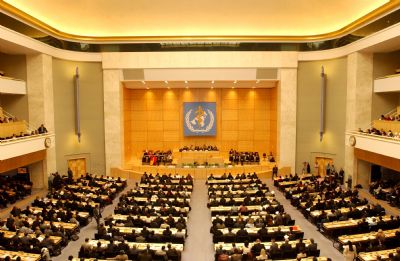 For the first time in eight years Taiwan has not been invited to attend the World Health Assembly (WHA), the WHO's decision-making body. Beijing's refusal to assent this year has been attributed to its unhappiness with the policies of Taiwanese President Tsai Ing-wen, whose Democratic Progressive Party (DPP) leans towards formal independence from China.

The one-year-old Tsai administration signaled Tuesday that it would not be cowed, announcing that it will send a delegation to Geneva, headed by its health minister, whether or not it would be allowed to attend the May 22-31 WHA.

'We will never succumb to Beijing's pressure, but will continue to make our voice heard in the international community, and fight for our right to participate in the WHA and other international organizations,' said the government's mainland affairs council, which deals with relations across the Taiwan Strait.

WHO spokesman Christian Lindmeier confirmed to reporters in Geneva Tuesday that the registration deadline for the assembly has now passed but said he believed discussions over Taiwan were continuing.

Asked why it was the Palestinian territories were invited as an observer while Taiwan's invitation was dependent on China, Lindmeier said, 'To my understanding the 'one China' policy is a U.N.-wide accepted policy; Beijing is representing the one China.'...

Last Friday, six U.S. senators introduced bipartisan legislation calling on the federal government to lift restrictions of visits to Taiwan by cabinet-level and other U.S. officials.