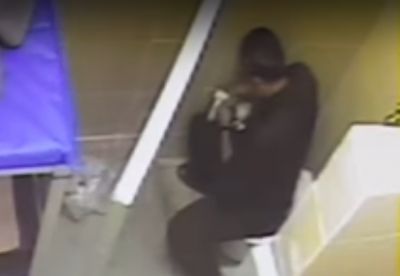 Marwan Barghouti eating candy during his "hunger strike," May 8, 2017
"Fida Abd Al-Hadi, the Palestinian Authority's (PA) deputy representative to the United Nations, on Thursday sent letters to the UN Secretary General, the chair of the UN Security Council and the chair of the UN General Assembly, asking them to intervene in the hunger strike by terrorists in Israeli prisons...

She claimed that the hunger strike is a 'peaceful protest'...Hundreds of terrorists in Israeli jails, about a sixth of the total number of those jailed, began a hunger strike on April 17 in an attempt to pressure Israel to improve the conditions of their imprisonment.

The hunger strike is being led by Marwan Barghouti, the archterrorist leader of Fatah who is serving five life sentences in Israel over attacks he planned against Israelis. It is widely felt that he is attempting to improve his political standing in the contest to replace current PA chairman Mahmoud Abbas by gaining publicity through the strike.

On Sunday, however, Israeli authorities distributed video footage proving that Barghouti secretly ate in his cell despite supposedly leading the hunger strike. It is unclear if he is the only one..."
Date
May 12, 2017
Title
PA Urges UN to Intervene in Terrorist Hunger Strike, Arutz Sheva
Original Source
http://www.israelnationalnews.com/News/News.aspx/229540
Attachment
Click here to view this article in MS Word/PDF format