The PA, UN, and Norway behind center named after terrorist who led killing of 37 civilians, including 12 children 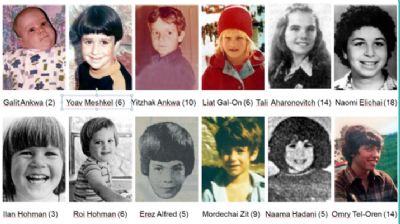 Photos of the 12 children murdered by Dalal Mughrabi, for whom the center is named after
"In another show of admiration for terrorist murderers and according to the Palestinian Authority's policy of presenting them as role models for Palestinian youth, the Palestinian NGO "Women's Technical Affairs Committee" (WTAC) has named a youth center for women after the terrorist murderer who led the most lethal attack in Israel's history.

The Dalal Mughrabi Center is a joint initiative of the NGO, the PA, the UN, and the Norwegian government! The center's name sign prominently includes the logos of:
-The PA Ministry of Local Government
-UN Women
-The Norwegian Representative Office to the PA

The center, which was inaugurated last week, is named after the terrorist who in 1978 led a group of terrorists who hijacked a bus and killed 37 Israelis, among them...12 children[.]...

Worse still, it is not only the name that glorifies the terrorist murderer, the purpose of the center is to educate about her murderous terror attack to youth..."
Date
May 26, 2017
Title
The PA, UN, and Norway behind center named after terrorist murderer Dalal Mughrabi who led killing of 37 civilians, including 12 children, Palestinian Media Watch
Author(s)
Itamar Marcus and Nan Jacques Zilberdik
Original Source
http://palwatch.org/main.aspx?fi=157&doc_id=21152
Attachment
Click here to view this article in MS Word/PDF format