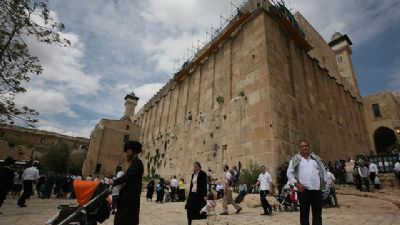 Cave of the Patriarchs, Hebron
"Israel is making efforts to quash or defeat a vote set to be held in the coming days by the United Nations Educational, Scientific and Cultural Organization (UNESCO) which will include a clause stating that Israel is not the sovereign power over Jerusalem.

The resolution was submitted by Arab countries and will be voted upon by 21 nation representatives during the UN body's World Heritage Committee when it meets July 2â12 in Krakow, Poland, for its annual assembly. Israel needs seven votes against in order to block the motion.

The clause about Jerusalem was a last-minute addition inserted into the resolution which already included the notion that the Cave of the Patriarchs will be recognized as a world heritage site.

The declarations within the resolution establishes an international acceptance that the Cave of the Patriarchs is a Palestinian Muslim site, setting the ground for a broader question of sovereignty and the historical right over a place that the Palestinians claim for themselves...

The wording of the proposal regarding Jerusalem is watered down when compared to that voted upon last year when UNESCO's World Heritage Committee adopted a Palestinian-sponsored resolution which ignored the Jewish connection to the Temple Mount or the Western Wall. Nevertheless, the text does still take an aggressive stance on Israeli sovereignty in Jerusalem, presents Israel and an occupying power and deems its decisions invalid..."
Date
June 26, 2017
Title
Israel Scrambles to Quash UNESCO Vote on Holy Sites, YNet News
Author(s)
Itamar Eichner
Original Source
https://www.ynetnews.com/articles/0,7340,L-4980915,00.html
Attachment
Click here to view this article in MS Word/PDF format