Arab envoy apologizes for not voting against UNESCO Hebron resolution 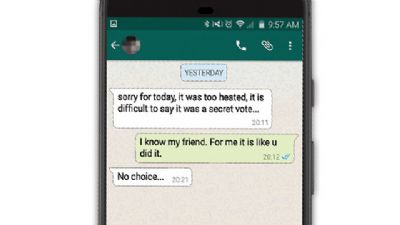 Text messages between the Israeli ambassador to UNESCO Carmel Shama-Hacohen and an Arab envoy
"An Arab ambassador of a country that does not have diplomatic ties has apologized to his Israeli counterpart Carmel Shama-Hacohen for not being able to vote against the UNESCO resolution declaring Hebron's Old City-and with it the Cave of the Patriarchs-as a Palestinian World Heritage Site.

The Arab ambassador conditioned his support to Israel in a secret ballot vote at UNESCO. But when the vote was held out in the open rather than at a private voting booth, the ambassador had no choice but to go back on his promise.

The resolution passed on Friday with 12 member states voting in favor, three voting against and six abstaining.

'Sorry for today, it was too heated, it is difficult to say it was a secret vote...' the ambassador told Shama-Hacohen in a message, later adding: 'No choice...'"
Date
July 9, 2017
Title
Arab envoy apologizes for not voting against UNESCO resolution, YNet News
Author(s)
Itamar Eichner
Original Source
https://www.ynetnews.com/articles/0,7340,L-4986580,00.html
Attachment
Click here to view this article in MS Word/PDF format