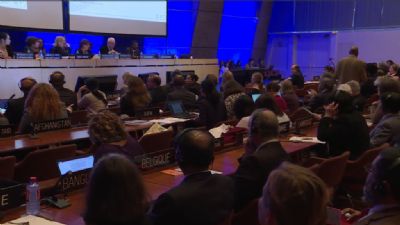 UNESCO World Heritage Committee (File photo)
"Germany's ambassador to UNESCO has drawn the ire of a prominent Jewish human rights organization after he stood for a minute's silence for 'Palestinian victims' at the global cultural organization's annual meeting in Krakow, Poland last week.

The ceremonial tribute to the Palestinians took place after the Cuban delegate to the meeting complained that the Israeli ambassador had violated procedure by calling for a minute's silence for the victims of the Nazi Holocaust.

Most of the delegations assented to the Cuban appeal - among those who rose for the silence was German Ambassador Stefan Krawielicki. On Monday, Dr. Shimon Samuels - the international director of the Simon Wiesenthal Center (SWC) who is attending the meeting in Krakow - told The Algemeiner of his 'outrage' at the 'German amalgam drawn between 6 million murdered Jews of Europe and the 'Palestinians.'..."
Date
July 10, 2017
Title
German UNESCO Ambassador Assailed Over Ceremonial Linkage Between Holocaust and Palestinians, The Algemeiner
Author(s)
Ben Cohen
Original Source
https://www.algemeiner.com/2017/07/10/german-unesco-ambassador-assailed-over-ceremonial-linkage-between-holocaust-and-palestinians/
Attachment
Click here to view this article in MS Word/PDF format