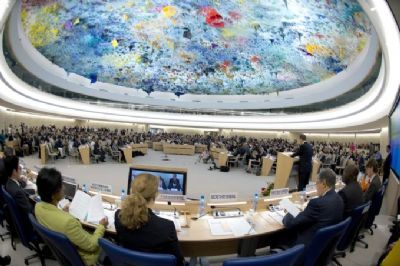 The UNHRC has been pushing efforts to boycott businesses that are active in Jewish settlements since it adopted Resolution 31/36 on March 24, 2016. A new boycott list is due out by December.

The report, authored by Kohelet legal expert and Northwestern University Prof. Eugene Kontorovich, accuses the UNHRC of formulating a boycott list that 'is far too narrow in its scope, and fails to capture the full context and magnitude of business activities that support settlement enterprises in occupied territories.'...

Kontorovich concluded that many of the 44 companies he listed 'have significant links to governments of their home countries, often being partially owned or controlled by the state.' He challenged the UNHRC to either target companies doing business in all occupied territories or not to unfairly solely target Israel.

While the companies said their activities were legal, none of the companies explicitly addressed its interpretation of how it believed its activities could comply with international law despite operating in occupied territories..."
Date
July 11, 2017
Title
‘UNHRC focuses on Israel, ignores companies operating in other occupied areas’, The Jerusalem Post
Author(s)
Yonah Jeremy Bob
Original Source
http://www.jpost.com/israel-news/politics-and-diplomacy/unhrc-selective-on-boycotts-zeroes-in-on-israel-499438
Attachment
Click here to view this article in MS Word/PDF format