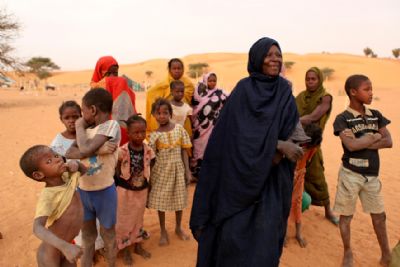 Residents of so-called slave villages
The UN is failing miserably at protecting human rights victims in the world's darkest places.

A case in point is the UN Human Rights Council Special Rapporteur on contemporary forms of slavery, its causes and consequences, Gulnara Shahinian. After wrapping up her visit to Mauritania in February 2014 the Rapporteur "hailed Mauritania's commitment and progress in the fight against slavery." She said: "I commend the Government of Mauritania for the measures taken since my last mission in 2009 and for its commitment to ending slavery in the country." On top of that, the Council is not scheduled to discuss the Rapporteur's findings until September 2014.

The Special Rapporteur's comments and the Council's deafening silence should come as no surprise. The Mauritanian UN representatives have repeatedly downplayed or denied the scope of slavery in their country. On March 4, 2013 speaking before the UN Human Rights Council, the delegate said that "slavery was no longer institutionalized in Mauritania" and that "proven cases of slavery were dealt with in the country's courts". He also warned against "the politicization of slavery in Mauritania." On September 16, 2013 the Mauritanian representative at the Council "rejected allegations that large number of persons in Mauritania live in a state of slavery."

In fact, as reported in October 2013, Mauritania has the highest proportion of people in slavery in the world. Further, the newly released State Department 2013 Human Rights Report on Mauritania found the following

"The central human rights problems were ... continuing slavery and slavery-related practices... [T]here were reports that police detained and questioned journalists during the year in connection with their coverage of topics such as slavery... There were no convictions for slavery during the year, nor did the government initiate judicial proceedings against...alleged slave masters...Slavery-like practices, typically flowing from ancestral master-slave relationships and involving both adults and children, continued. Former slaves and their descendants remained in a dependent status in part due to a lack of marketable skills, poverty, and persistent drought...Some former slaves and descendants of slaves were forced to work for their old masters in exchange for some combination of lodging, food, and medical care...Women with children faced particular difficulties and could be compelled to remain in a condition of servitude, performing domestic duties, tending fields, or herding animals without remuneration... Some persons continued to link themselves to former masters because they believed their slave status had been divinely ordained and they feared religious punishment if that bond was broken...Forced labor also occurred in urban centers where young children, often girls, were retained as unpaid household servants. Some individuals self-identified as slaves or masters and claimed with varying degrees of plausibility they were unaware slavery had been abolished."