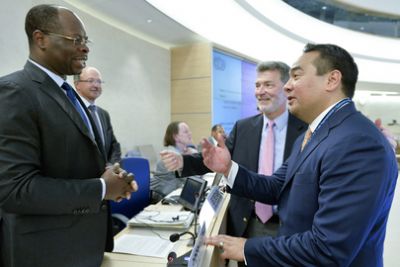 As the slaughter in Syria continues unabated, Russian aggression succeeds, Iranian terrorism spreads, and North Koreans are tortured and starved en masse, Harper made the ridiculous claim that: "the Human Rights Council is a critical venue for addressing some of the most persistent threats to human rights around the world... With U.S. leadership, the Council has responded to urgent human rights situations in real time, shining a spotlight on situations such as Syria, North Korea, Iran and the Central African Republic."

Here is what Harper means by "shining a spotlight:" "In Ukraine, we are deeply concerned by the human rights impact of destabilizing actions by external actors." In the world of the UN Human Rights Council, he dared not even mention the word "Russia."

Another laughable example: Harper said "We will also reaffirm the importance of Internet Freedom...We are pleased to be working with excellent partners on this initiative, including core group members...Turkey." That's the same Turkey where the Erdogan government has blocked dozens of websites this year including YouTube and Twitter.