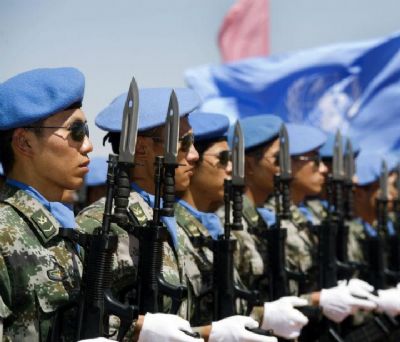 UN peacekeepers
Column Lynch reports: "For years, American administrations have embraced U.N. peacekeeping as a cost-effective alternative to U.S. military intervention, a policy that has allowed Washington to harness the power and purse of foreign governments to promote America's security and humanitarian interests abroad. 'It's a smart investment,' President Obama recently told cadets at West Point.

In South Sudan, the investment is indeed paying dividends -- for China. Last month, Beijing quietly secured a deal that will put the U.N.'s famed blue helmets to work protecting workers in South Sudan's oil installations, where China has invested billions of dollars over the years and holds a major financial stake -- at least 40 percent -- in South Sudan's largest oil field. American taxpayers, who fund about 27 percent of the cost of U.N. peacekeeping missions, will effectively be helping to shoulder the financial burden of securing China's investment.

The unprecedented arrangement was hammered out last month in closed-door negotiations -- which have not been previously detailed -- over how to bolster the U.N. Mission in South Sudan, or UNMISS, so it could better protect hundreds of thousands of civilians from ethnic cleansing. The beefed-up mission will include thousands of additional troops from African countries as well as hundreds more from China.

Faced with South Sudan's descent into civil and ethnic conflict over the past seven months, the United States spearheaded negotiations in the U.N. Security Council on a new resolution that would seek to ensure the safety of the country's civilian population. The resolution "focuses the mission on its core activities of protection of civilians; monitoring and investigating human rights abuses; and facilitating the delivery of humanitarian assistance," Samantha Power, the U.S. ambassador to the United Nations, said after the May 27 vote.