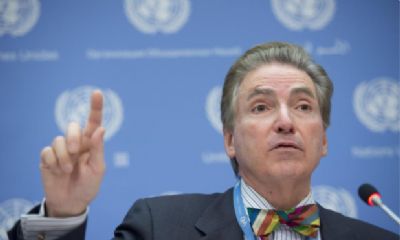 The resolution of the UN Human Rights Council was adopted on September 26, 2014 against the wishes of democratic states. The vote was 29 in favor and 14 against including the U.S. and the European Union.

Notwithstanding the defeat, the U.S. will now pay 22% of the cost for the position of "Independent Expert on the promotion of a democratic and equitable international order." The position was first created in 2011 and this latest resolution extends the mandate for another three years.

What prompted the human rights abusing crowd to get behind the position and push? In his most recent report, expert Alfred de Zayas takes direct aim at the U.S. and its military spending in particular, criticizing it as antithetical to an equitable international order. Instead, de Zayas promotes "reducing military spending" and "resourcing...the global climate change challenge."

ISIS will apparently take care of itself.

Enthusiastic about the de Zayas report was Iran and the Organization of the Islamic Cooperation (OIC). Speaking on behalf of the OIC on September 10, 2014, Pakistan said: "the OIC welcomes the report...we strongly believe that staggering military expenditures and heavy investment in the production of armed drones and autonomous lethal weapons have an adverse impact on the enjoyment of rights..."

Iran, currently spending its country's precious resources to acquire nuclear weapons, told the Council on September 10: "On the report...we appreciate his preliminary study on the adverse impacts of military spending in which he has stressed the need for disarmament...We share also the idea...that nuclear arsenals are anachronisms... "
Date
September 26, 2014
Title
“Mandate of the Independent Expert on the promotion of a democratic and equitable international order,” UN Human Rights Council Resolution, A/HRC/27/L.16
Attachment
Click here to view this document in MS Word/PDF format