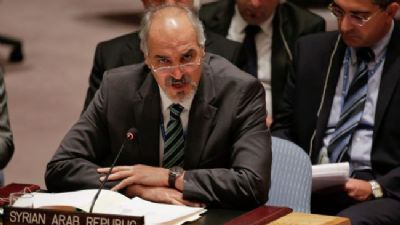 Bashar Jaafari, Permanent Representative of the Syrian Arab Republic to the United Nations
The Assad regime - responsible for the deaths of over a hundred thousand Syrian citizens, including through the use of chemical weapons - has found a culprit: Zionism.

At a General Assembly thematic debate on "Promoting Tolerance and Reconciliation: Fostering Peaceful, Inclusive Societies and Countering Violent Extremism" held on April 21, 2015, the Representative from the Syrian Arab Republic claimed that the self-determination of the Jewish people is responsible for the rise of Muslim terrorist groups. He told the General Assembly:

"Mr. President, those that think that groups such as Daesh, Jabhat al-Nusra, Boko Haram, Jemaah Islamiya occurred spontaneously or by accident are deluding themselves or they are just choosing to look away. There are real networks that explain how these groups developed. The most visible are Zionism, the fatwas that have been issued and the extremist educational programs, and the authorization by certain governments of terrorism and extremism as a tool for implementing political agendas that are very doubtful in Syria or elsewhere."
Date
April 23, 2015
Title
Statement by the Representative of the Syrian Arab Republic at the High-Level Thematic Debate on Promoting Tolerance and Reconciliation: Fostering Peaceful, Inclusive Societies and Countering Violent Extremism, United Nations
Original Source
http://webtv.un.org/watch/part-1-promoting-tolerance-and-reconciliation-fostering-peaceful-inclusive-societies-and-countering-violent-extremism-general-assembly-high-level-thematic-debate/4189256726001
Note
[At 2:45]