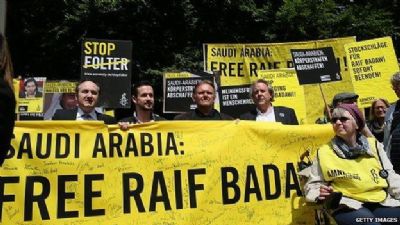 Protests were held following the first flogging of Raif Badawi by the kingdom
On June 3, 2015, UN Human Rights Council President Joachim RÃ¼cker addressed a conference on "religious freedom" hosted by the 56 member states of the Organization of Islamic Cooperation in religiously intolerant Saudi Arabia.

His statement included not one word about freedom of religion in his host country. Nor did he call for Saudi Arabia to stop flogging or release its imprisoned religious dissidents.

RÃ¼cker legitimized Saudi Arabia as being seriously interested in religious freedom and human rights and then he left.