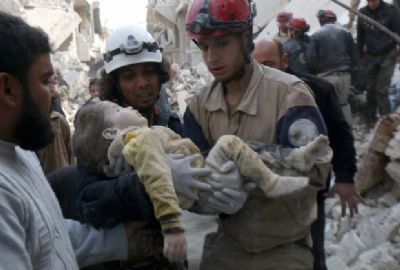 Syrian Civil Defence workers carry the body of a child on 1 February, 2015, following an air strike by Syrian government forces in the northern city of Aleppo (AFP)
At a Security Council meeting held on January 19, 2016 regarding the protection of civilians, Syria tried to make Israel a scapegoat for the Assad's regime's brutal attacks against its own citizens. In the words of the Syrian representative:

"It is also unfortunate that a large number of speakers have not addressed the issue of the deep-seated causes of the Syrian crisis, causes which are terrorist groups ... and the perpetration of Israeli occupation in Syrian territory."
Date
January 19, 2016
Title
Meeting of UN Security Council on Protection of Civilians, UN Webcast [3:14:30 - 3:17:09]
Original Source
http://webtv.un.org/meetings-events/security-council/watch/part-2-the-protection-of-civilians-in-armed-conflict-security-council-7606th-meeting/4712534741001