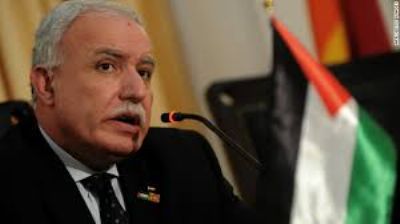 Palestinian Authority Foreign Affairs Representative Riyad al-Maliki (File photo)
On the second day of the UN "Human Rights" Council meeting in Geneva on March 1, 2016, Palestinian Authority Foreign Affairs Representative Riyad al-Maliki claimed that the recent spate of stabbings, shootings, and car rammings by Palestinians against Israelis is a "popular wave." According to al-Maliki, it is Israelis trying to defend themselves from Palestinian attacks who are guilty of acts of terror, and akin to ISIS.

In his words: "Since the beginning of the last popular wave...the people of Palestine face a systematic terror by Israel...[W]e can hear the sound of bullets and crimes perpetrated by ISIS and we can hear the sounds of bulldozers of the Israeli occupation while establishing illegal colonies..."

Al-Maliki also called for states to prevent Jews from entering. In his words: "I call on all the countries to...not allowing the entry of illegal settlers into their countries."
Date
March 1, 2016
Title
Statement of the Palestinian Authority Representative at 31st session of the Human Rights Council, UN Webtv
Original Source
http://webtv.un.org/watch/state-of-palestine-high-level-segment-5th-meeting-31st-regular-session-human-rights-council/4780581262001
Attachment
Click here to view this document in MS Word/PDF format