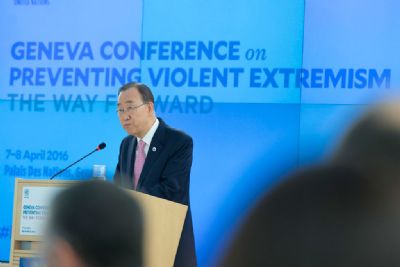 UN Secretary General Ban Ki-moon, Geneva, April 8, 2016
At a UN conference on "Preventing Violent Extremism" in Geneva on April 7 and 8, 2016, Muslim states argued that "foreign occupation" - meaning Israel - was to blame for Islamist terror rather than radical Islam.

Here is some of the verbiage in a UN "anti-violence" "anti-extremism" conference:

Organization of Islamic Cooperation: "We're confronted with a faceless enemy, with no face or creed, which lurks in the shadows of fear and frustration, breeds on despair and disillusionment, and is fed by foreign occupation...It's a manifestation of growing anger, hatred, and sense of helplessness against continuing wars, injustice, oppression, and the denial of fundamental freedom and rights, particular to those of Palestinians."

Syria: "Violent extremism is a multidimensional phenomenon, thus fighting and preventing it should not rest on a selective approach to its goals and root causes. That includes foreign occupation, discrimination and xenophobia."

Jordan: "Among the drivers of violent extremism are unresolved and protected conflicts and foreign occupation. All efforts should, therefore, be focused on resolving the Palestinian-Israeli conflict and ending occupation, which provides pretext for recruiting purposes and spreading violent extremist ideologies."

Qatar: "We reiterate the importance of the Plan of Action to prevent violent extremisms and to eradicate all the drivers, such as the continuing conflicts, occupation... Facing such a challenge, Mr. Chairman, requires an international joint response and a comprehensive strategy to end conflicts in the world, namely: ending the Israeli occupation of Arab and Palestinian territories and establishing an independent and sovereign State of Palestine..."

Saudi Arabia: "Plan of Action ... does not take into consideration ... Israeli occupation of occupied Arab territories in Palestine for decades, without any regulations."

Kuwait: "And we call upon the need ... to look into the reasons behind this phenomenon, like ... occupation..."

Iraq: "There are also other reasons that lead to injustice, such as the occupation of cities and territories by other states. This is mainly the case of the Israeli occupation of the Palestinian territories."

Bahrain: "Israeli occupation of Arabic lands and Palestine for a long time are main factors, are reasons behind this phenomenon."

Oman: "... occupation are among the causes that provoke extremism."

Islamic states used their UN platform to insist that terrorism is caused by "Islamophobia" and to further efforts to curtail free speech in order to prevent "insulting Islam" - notwithstanding the fact (as the Secretary-General stated at the meeting's outset) that most of the victims of Muslim extremism are fellow Muslims.

Pakistan: "Will not the rising trends of xenophobia and Islamophobia contribute to strengthen the extremists?... In recent years there's been a disturbing rise of extreme right-wing parties driven by xenophobic Islamophobic impulses in the West."

Organization of Islamic Cooperation: "Muslims are suffering from the scourge of terrorist groups and the Islamophobic policies and discourse."

Qatar: "Also, some parties are using violent extremism acts in order to fuel Islamophobia and other acts of terrorism. Attacking religious symbols would also give more excuses to extremists and their recruiters."

Iran: "In this connection, extremist ideology and hate speech in the media against Muslims should not be condoned in the name of freedom of expression, which helps create conditions conducive for the spread of violent extremism."

Egypt: "There are other main drivers to violent extremism or terrorism that were not identified in the Plan of Action, such as ... racism, and xenophobia, defamation of religion... the Action Plan did not include a reference to all the drivers within states leading to violent extremism and, therefore, to terrorism such as Islamophobia and actions that are insulting to Islam and to the Prophet under the pretext of freedom of expression as well as treating Muslims as second class citizens as well as other reasons."

Oman: "[T]here is a need to address all aspects of Islamophobia."

Sudan: "I mean the main manifesto of those political parties is based on this anti-Muslims tendency and anti-Arabs, and I think this is very, very alarming. So the Islamophobia and many, I mean, challenges I think needs to be-needed to be addressed... We are facing, or rather this comes in the roots of many of the international problems that we are facing nowadays, including ... Islamophobia, and the provocative media that is targeting Islam and the figures of Islam."
Date
April 7-8, 2016
Title
“Geneva Conference on Preventing Violent Extremism â The Way Forward,” United Nations and Government of Switzerland, Unofficial transcript, Human Rights Voices
Original Source
https://www.un.org/counterterrorism/ctitf/en/geneva-conference-preventing-violent-extremism
Attachment
Click here to view this document in MS Word/PDF format