Cuba, Seeking UN "Human Rights" Council Seat, Pledges to Promote Human Rights For All, Except Its Own People 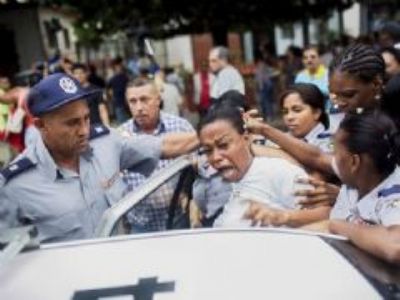 The arrest of a Cuban political protester
Editor's Note: Cuba was elected to the Human Rights Council with 160 votes from the 193 UN member states eligible to vote.

On October 28, 2016, the United Nations will be holding elections for the UN Human Rights Council (UNHRC). According to the UN General Assembly resolution that created the Council (A/RES/60/251, adopted March 15, 2006): "when electing members of the Council, Member States shall take into account the contribution of candidates to the promotion and protection of human rights and their voluntary pledges and commitments made thereto." To that end, countries seeking membership sometimes submit "pledges" prior to elections.

Among those seeking a spot on the UNHRC is Cuba. In its pledge, Cuba made such statements as:

"3. Cuba remains committed to promoting consideration of the just historical demands of the peoples of the South and of the large majority worldwide on issues such as the effective realization of the right to development; combating racism, racial discrimination, xenophobia and related intolerance; and ensuring full respect for the principles of universality, indivisibility, objectivity and non-selectivity in strengthening cooperation on human rights matters. Cuba will continue to increase the attention paid to these just demands of individuals and peoples in its capacity as the main sponsor of some 10 draft resolutions in the Human Rights Council.

4. Cuba reaffirms its readiness to continue working tirelessly to achieve the shared goal of enabling all individuals and peoples throughout the world to enjoy all human rights, on the basis of respect for the Charter of the United Nations, the internationally agreed human rights instruments and the Vienna Declaration and Programme of Action. Cuba reiterates its commitment to international cooperation in the promotion and protection of human rights..."

However, Cuba's human rights record showed it has instead been working tirelessly to repress its own people. According to the U.S. State Department's most recent annual report on human rights (released April 2016):

"The principal human rights abuses included the abridgement of the ability of citizens to choose their government; the use of government threats, physical assault, intimidation, and violent government-organized counterprotests against peaceful dissent; and harassment and detentions to prevent free expression and peaceful assembly.

The following additional abuses continued: harsh prison conditions; arbitrary, short-term, politically motivated detentions and arrests; selective prosecution; denial of fair trial; and travel restrictions. Authorities interfered with privacy by engaging in pervasive monitoring of private communications. The government did not respect freedom of speech and press, restricted internet access, maintained a monopoly on media outlets, circumscribed academic freedom, and maintained some restrictions on the ability of religious groups to meet and worship. The government refused to recognize independent human rights groups or permit them to function legally. In addition the government continued to prevent workers from forming independent unions and otherwise exercising their labor rights.

Officials at the direction of the government committed most human rights abuses. Impunity for the perpetrators remained widespread..."

The disparity between the pledge and the facts is not expected to make any difference to the votes of UN member states.
Date
October 19, 2016
Title
Candidature of Cuba to the Human Rights Council, 2017-2019, Voluntary pledges and commitments pursuant to General Assembly resolution 60/251, A/71/71
Original Source
http://www.un.org/ga/search/view_doc.asp?symbol=A/71/71
Attachment
Click here to view this document in MS Word/PDF format