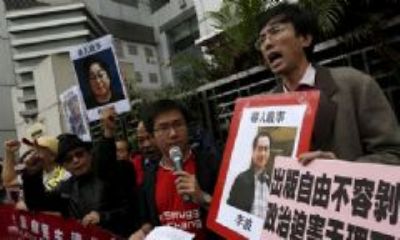 Protestors against disappearance of five members of a Hong Kong publishing house and bookstore who criticized Chinese officials
Editor's Note: China was elected to the Human Rights Council with 180 votes from the 193 UN member states eligible to vote.

On October 28, 2016, the United Nations will be holding elections for the UN Human Rights Council (UNHRC). According to the UN General Assembly resolution that created the Council (A/RES/60/251, adopted March 15, 2006): "when electing members of the Council, Member States shall take into account the contribution of candidates to the promotion and protection of human rights and their voluntary pledges and commitments made thereto." To that end, countries seeking membership sometimes submit "pledges" prior to elections.

Among those seeking a spot on the UNHRC is China. In its pledge, China made such statements as:

"2. China attaches great importance to promoting and protecting human rights. Respect for and protection of human rights have been enshrined in the Constitution of the Communist Party of China, the Constitution of the People's Republic of China and China's national economic and social development plans. Combining universal principles of human rights with its own national conditions, China has been working vigorously to promote economic and social development, advance social equality and justice, strengthen legal guarantees for human rights and the rule of law and facilitate the comprehensive and coordinated development of economic, social and cultural rights as well as civil and political rights. China has embarked on a path of human rights development suited to its own national conditions..."

However, China's record is replete with massive political oppression. According to the U.S. State Department's most recent annual report on human rights (released April 2016):

"Repression and coercion markedly increased during the year against organizations and individuals involved in civil and political rights advocacy and public interest and ethnic minority issues. The crackdown on the legal community was particularly severe, as individual lawyers and law firms that handled cases the government deemed "sensitive" were targeted for harassment and detention, with hundreds of lawyers and law associates interrogated, investigated, and in many cases detained in secret locations for months without charges or access to attorneys or family members. Officials continued to harass, intimidate, and prosecute family members and associates to retaliate against rights advocates and defenders. Individuals and groups regarded as politically sensitive by authorities faced tight restrictions on their freedom to assemble, practice religion, and travel. Authorities resorted to extralegal measures, such as enforced disappearance and strict house arrest, including house arrest of family members, to prevent public expression of critical opinions... Authorities continued to censor and tightly control public discourse on the internet and in print and other media. There was severe official repression of the freedoms of speech, religion, association, and assembly... Rights abuses in minority areas peaked around high-profile events, such as the visit of foreign officials, national meetings, commemorations, and high-profile trials.

As in previous years, citizens did not have the right to change their government and had limited forms of redress against official abuse. Other human rights abuses during the year included alleged extrajudicial killings; executions without due process; prolonged illegal detentions at unofficial holding facilities known as "black jails"; torture and coerced confessions of prisoners; detention and harassment of lawyers who took on "sensitive" cases, journalists, writers, bloggers, dissidents, petitioners, and others whose actions the authorities deemed unacceptable ; lack of due process in judicial proceedings; political control of courts and judges; closed trials; the use of administrative detention; failure to protect refugees and asylum seekers; extrajudicial disappearances of Chinese and foreign citizens; restrictions on nongovernmental organizations (NGOs); discrimination against women, minorities, and persons with disabilities; a coercive birth-limitation policy that, despite the lifting of one-child-per-family restrictions, in some cases resulted in forced abortion (sometimes at advanced stages of pregnancy); and trafficking in persons..."

The disparity between the pledge and the facts is not expected to make any difference to the votes of UN member states.
Date
October 19, 2016
Title
Candidature of China for membership of the Human Rights Council for the period 2017-2019, A/71/294
Original Source
http://www.un.org/ga/search/view_doc.asp?symbol=A/71/294
Attachment
Click here to view this document in MS Word/PDF format