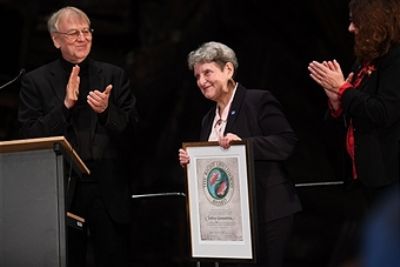 Russian activist Svetlana Gannushkina receives the Right Livelihood Award
Russia has frustrated a Swedish NGO's attempt to gain access to UN meetings and events on the ground that the NGO gives out "Alternative Nobel Prizes" to recipients that have been critical of Russia. Among the recipients of the Right Livelihood Award Foundation's annual awards in 2016 was the Syrian Civil Defense, also known as the "White Helmets," which has accused Russia of war crimes in Aleppo. Another recipient of the organization's 2016 awards was the Russian activist Svetlana Gannushkina, who is critical of Russia's immigration and refugee policies and whose organization, Civic Assistance, is listed as a "foreign agent" by the Russian government.

Russia is one of 19 member states in the UN NGO Committee, which reviews and decides whether to recommend granting official UN accreditation to NGOs. Organizations seek UN accreditation because it permits them to attend meetings, to circulate documents, and on occasion to hold events inside the UN and address UN sessions. Members of the NGO Committee include countries that have little to no respect for freedom of speech or association and that continually hinder the operation of independent NGOs, such as China, Iran, Sudan, and Venezuela. Their standard operating procedure is to defer applications session after session with inappropriate, specious or repetitive questions and demands of the applicant NGO. After years of deferrals, Western states find that if they bring applications to a vote, they are simply outvoted in Committee.

The NGO Committee is currently holding a two and half week session and Russia requested information from the Right Livelihood Award Foundation about the criteria used for its awards on February 1, 2017. But when the NGO quickly provided a response while the Committee was still in session, the Russian representative submitted a second request for additional information on February 7, 2016. This time it concocted a question about why the NGO listed one of its activities as "defense" of laureates, and whether this activity involves a "high degree of politicization" of the recipients of the award.
Date
February 7, 2017
Title
Continuing Its Regular Session, Committee on Non-Governmental Organizations Recommends 30 Entities for Status, Defers Action on 60, UN Meetings Coverage
Original Source
http://www.un.org/press/en/2017/ecosoc6814.doc.htm
Attachment
Click here to view this document in MS Word/PDF format