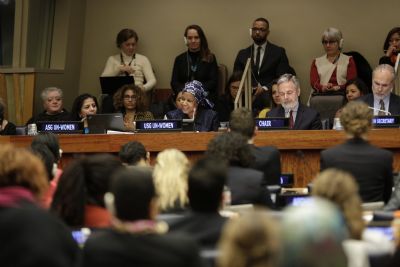 A meeting of the 2017 session of Commission on the Status of Women
An Israeli-sponsored UN resolution â the first to focus on the subject of eliminating sexual harassment in the workplace - was unanimously adopted by the UN's top women's rights body, the Commission on the Status of Women. Following its adoption on March 25, 2017, Iran and Arab nations took the opportunity to accuse Israel of sexually harassing Palestinians, as well as everything from being a serial killer to apartheid.

The highly inflammatory remarks from Iran included accusations of Israel being an apartheid regime, of openly practicing racism, of cold-blooded killing, and even of being a serial killer. Iran's own record on women's rights involves stoning women for adultery, unpunished female genital mutilation, flogging for "inappropriate" attire, and widespread discrimination in economic and social spheres, including valuing a woman's testimony as half that of a man.

The representative of Oman, speaking on behalf of the "Arab Group," focused his remarks on accusing Israel of violence and sexual harassment of Palestinian and Arab women and children. Oman, which also values a woman's testimony as half that of a man, has no law against sexual harassment or spousal rape. Forced marriage and female genital mutilation are common.

In the Iranian representative's words:

"This resolution reminds the Persian saying that if one of the foundations of the house was rotten, the master got busy fixing its design, style, and curb appeal. Israel, the last apartheid regime in the world presented a resolution that is riddled with hypocrisy.

By putting toward this resolution, Israel, the only regime in the world that openly practices racism, seeks to ride the wave towards international legitimacy. A dreadfully regressive regime pretends to be progressive.

As millions of civilians, women, children, people with disability and elderly people are being taken hostage by Israel, this attempt to sponsor combating sexual harassment at workplace looks utterly hypocritical and preposterous.

As Israel continues to grossly and systematically breach international law, including humanitarian and human rights law in Palestine, nothing but widespread human suffering has been inflicted to the civilians. The long persistent illegal and brutal occupation continues and causes so much anguish to the Palestinian people.
...
Israel has never stopped to distract attention from its inherent cruelty.
...
The world will always remember that Israel in the 21st century continues to grab and occupy other's lands, destruct their homes, burn the owners alive while cold bloodily kill injured in daylight in front of camera lenses.
...
Before lecturing the world on sexual harassment of women at workplace, Israel must release women and children whose only crime is resisting occupation. Close the biggest prison of the world that continues to suffer millions of women and children, stop demolition of their homes, quit grabbing lands and farm that belong to these women, recognize the right to life, stop destabilizing legitimate governments, which has proven to be disastrous for the lives of millions of women and children. Stop sending its terrorists and assailants to other countries whose dirty jobs would only leave more widowed women and orphaned children.

We believe that presentation of this resolution only amounts to witnessing a serial killer preaches on the sanctity of life..."

In the words of the representative of Oman, speaking on behalf of the Arab Group:

"Israel is committing violence and not only sexual harassment against women and Palestinian children, be it in prisons or in all the occupied territories. Israel is violating international law, humanitarian law and United Nations resolutions, especially resolution 2334. We then wonder how can Israel dare to submit such a resolution?

Mr. Chairman, I have remind you of the fact that sexual harassment is committed by the strong against the weak, and Israel finds itself in a situation of the strong, and Arab women in the position of the weak..."
Date
March 24, 2017
Title
Resolution, “Preventing and eliminating sexual harassment in the workplace,” E/CN.6/2017/L.4, UN Commission on the Status of Women
Original Source
http://undocs.org/E/CN.6/2017/L.4
Attachment
Click here to view this document in MS Word/PDF format
Note
A webcast of the meeting can be found here.