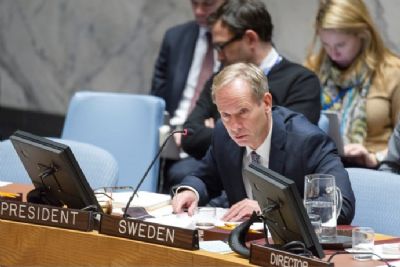 Swedish Ambassador to the UN Olof Skoog at the UN Security Council (File photo)
At an emergency session of the Security Council held on the same day that a terror attack in Stockholm left at least three dead, Sweden chided the United States for using military force to end the Assad regime's impunity for terrorizing Syrians. During the April 7, 2017, meeting to discuss Syria's deadly chemical weapons attack on April 4, 2017, Sweden's ambassador to the UN, Olof Skoog, said the following:

"With regard to the US air strike last night in response to the 04 April attack. It is important that action is based on international law. Last night's missile attack also raises questions of compatibility with international law. As the Secretary-General has said, restraint is important to avoid any risk of escalation."
Date
April 7, 2017
Title
Statement by Sweden at the Security Council Meeting on the Syrian Gas Attack, Permanent Mission of Sweden to the UN
Original Source
http://www.government.se/statements/2017/04/070417syria/
Attachment
Click here to view this document in MS Word/PDF format