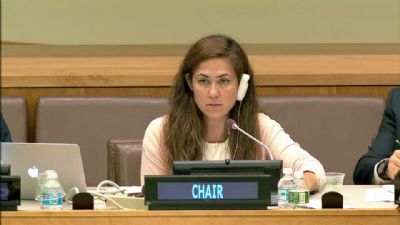 A representative of Turkey chairing a meeting of the UN NGO Committee
A UN Committee charged with allowing non-governmental organizations (NGOs) to gain greater access to the UN continued its bi-annual session on May 25, 2017 by blocking NGOs that promote human rights from gaining UN accreditation. Members of the UN NGO Committee include countries where NGOs do not have freedom of association, such as Iran, Russia, Cuba, Pakistan, Turkey, and Nicaragua.

The United States representative pointed out at the end of the day that only 2 of 43 applications from the "Global North" list (that is, NGOs from mainly Western countries) were recommended for accreditation. Significantly, the applications considered were from NGOs that have had their applications already deferred at least once. Members of the Committee can, and often do, defer applications session after session with inappropriate, specious or repetitive questions and demands of the NGOs.