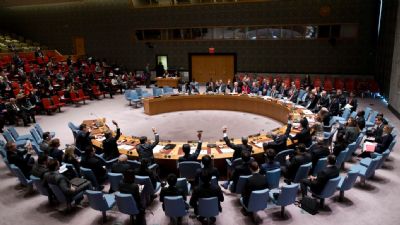 The Security Council (File photo)
The U.N. Security Council adopted a resolution on February 24, 2018 demanding a 30-day ceasefire in Syria, but without any penalties for defiance of the ceasefire. The resolution was adopted after several days of delay by Russia, an ally of the Assad regime. During the delay, Syrian air strikes continued to massacre hundreds of civilians in the Syrian town of Ghouta.

The resolution does not impose any punishments on Syria if it chooses to disregard the resolution and continue butchering its citizens during the supposed ceasefire. Instead, the resolution merely requires the Secretary-General to report on the parties' "compliance":