U.N. Commission on the Status of Women adopts only one country-specific resolution - against Israel 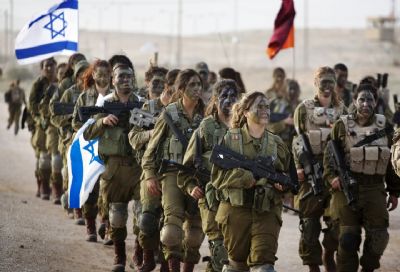 Women in the Israeli Defense Forces
The U.N.'s top body for women's rights concluded its latest session by condemning only one country â Israel. The condemnation came in the form of a resolution, entitled "Situation of and assistance to Palestinian women," which the U.N. Commission on the Status of Women adopted on March 23, 2018. The Commission, made up of 45 U.N. Member States, did not adopt resolutions against any other country on the planet - states where women are utterly repressed, child marriages are rampant, and female genital mutilation is permitted (such as Iran, Egypt, or Yemen).

The anti-Israel resolution ignores "the situation of" Palestinian women subject to Palestinian misogyny. The only mention of Palestinian men or authorities is to commend "the achievements of the Palestinian Government."

The resolution actually incites more violence against women by demonizing Jewish mothers and girls, who are labelled "extremist Israeli settlers" engaged in "acts of terror." The Jewish women and girls who are victims of Palestinian terror merit no mention.
Date
March 23, 2018
Title
Draft Resolution, “Situation of and assistance to Palestinian women”, U.N. Commission on the Status of Women, 62nd Session, E/CN.6/2018/L.3
Original Source
http://undocs.org/E/CN.6/2018/L.3
Attachment
Click here to view this document in MS Word/PDF format