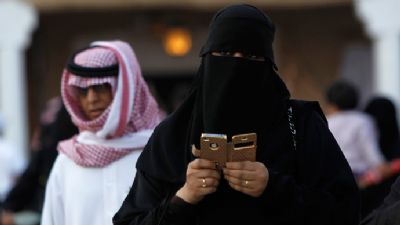 "Saudi Arabia, which has the largest number of Twitter users relative to internet users in the world, has formed a special task force to track users of the popular social media who are accused of spreading vice and witchcraft. The Commission for the Promotion of Virtue and Prevention of Vice, which serves as the religious police of the conservative Gulf kingdom, is conducting surveillance of Twitter accounts in an effort to reign in heightened interest in subjects related to sorcery.

The religious public watchdog is keeping a lookout for those accounts which 'are spreading vice and witchcraft' through the community, said Ahmed Al Jardan, the Commission's spokesman, as quoted by the Saudi news network Al Arabiya. 'We will track down all those who are behind these accounts whether they are men or women...we are determined to eliminate these accounts before they become widespread and out of control,' he said...

Al Arabiya quoted Saudi Arabia's Mufti, the country's leading Islamic cleric, as saying that social media networks like Twitter have become a "podium for spreading evil and bad ideas and exchanging accusations and lies" by many of their subscribers. 'Many Twitter users in the kingdom are also fools who lack modesty and faith,' he said.

The crackdown on Twitter users comes in the same week that Riyadh passed new counter-terrorism legislation that makes it an act of terrorism for any person to disturb public order or defame the reputation of the state or the king."
Date
February 6, 2014
Title
Saudi religious police hunt down Twitter ‘witchcraft’ accounts, RT
Original Source
http://rt.com/news/saudi-twitter-religion-police-828/
Attachment
Click here to view this document in MS Word/PDF format