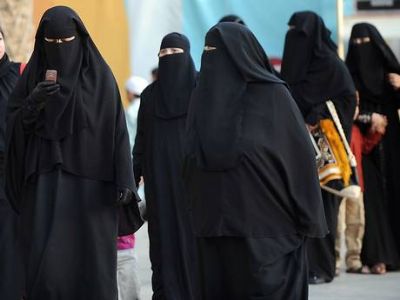 Saudi women
"Education departments in a number of regions in Saudi Arabia have banned female employees and visitors who do not wear a face veil from entering girls' schools, the Saudi Gazette reported on Monday.
The report cited a pamphlet sent by education departments to school principals, in which male and female school guards are instructed to abide by Islamic rules, regulations and directives and moral principles.
They should avoid anything that violates the honor of the profession, the pamphlet said. The education departments said no female employee or student should be allowed to leave school before the end of school hours unless they have a written permission from the female school principal. The identity cards of drivers who transport female students in private cars should be checked.
Men should not be allowed to enter the schools except in special circumstances after checking by the female in-charge and after taking precautions to prevent mixing between genders, the instructions said, according to the Saudi Gazette."
Date
February 25, 2014
Title
Saudi Schools Ban Females Who Don’t Wear a Face Veil, Arutz Sheva
Author(s)
By Elad Benari
Original Source
http://www.israelnationalnews.com/News/News.aspx/177830#.UwzhMvldV6I
Attachment
Click here to view this document in MS Word/PDF format