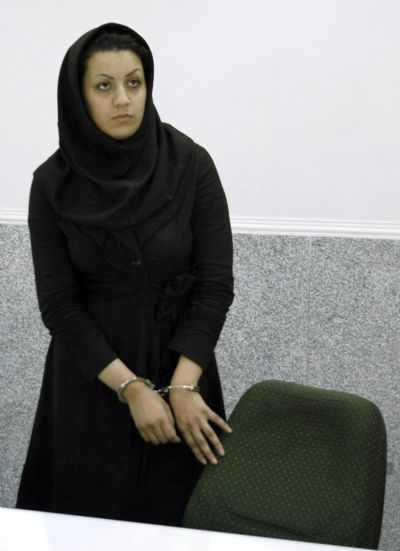 Reyhaneh Jabbari
"An Iranian rape victim is set to be hanged unless she agrees to apologize to her attacker's family for making the claim of sexual assault.

Interior designer Reyhaneh Jabbari killed Moreteza Abdolai Sarbandi after he lured her to a flat on the pretense of work, but then attacked her.

Sarbandi, an Iranian intelligence agent, had apparently offered to hire Jabbari to redesign his office and took her to an apartment where he abused her...

She was convicted of his murder at a subsequent trial after confessing, which many claim was extracted under intense pressure, and sentenced to hanging.

But Sarbandi's family claims she is lying about her version of events...

Sarbandi's son, Jalal, has demanded she change her version of events if she wants to live.

'Only when her true intentions are exposed and she tells the truth about her accomplice and what really went down will we be prepared to grant mercy,' he was reported as saying by The Telegraph."
Date
April 20, 2014
Title
Iranian rape victim to be hanged unless she apologizes for sex assault claims, New York Daily News
Author(s)
David Harding
Original Source
http://www.nydailynews.com/news/world/iranian-rape-victim-faces-hanging-sex-assault-claims-article-1.1762712
Attachment
Click here to view this document in MS Word/PDF format