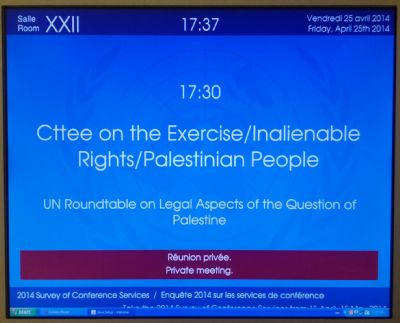 The UN Committee, created in 1975 to implement the infamous Zionism-is-racism General Assembly resolution, has held yet another vile session. On April 24 and 25, 2014 the UN "Committee on the Exercise of the Inalienable Rights of the Palestinian People" had what was billed as a "Roundtable on Legal Aspects of the Question of Palestine" in Geneva. All but the opening session were closed to the public. Or more accurately, after the representative of the UN-accredited Touro Institute on Human Rights and the Holocaust reported what had occurred at the opening session, she was barred from an additional session which had been advertised as open to the public.

In fact, though the event was advertised as closed except for two sessions, the published "List of Participants" reveals that 9 civil society organizations â all 9 with well-established anti-Israel credentials and 7 based in Ramallah - were actually taking part.

The opening session featured the representative of the Palestinian Authority - Issa Qaraqe, Palestinian Minister for Prisoners' Affairs, and as we reported earlier, he accused Israel of torturing and raping little children and subjecting Palestinian detainees to medical experiments.

A record of the private sessions, however, was obtained by Human Rights Voices. They included:

â¢ Sharon Weill, University of Geneva and the Graduate Institute, questioned the authority of military courts in Israel to try civilians, because "they are neither independent not impartial," and are "not providing due process" but "are political courts which are structurally prevented from providing a fair trial."

â¢ Valentina Azarova, Lecturer in Human Rights and International Law, Al-Quds University argued in favor of the Palestinian "right to return" including "Palestinian refugees in the Diaspora with a territorial link to Israel." In other words, she advocated a legal right to abolish a Jewish state. She also supported the "BDS" (boycott, divestment and sanctions) campaign against Israel, pushing third states and international actors to adhere to "the duty of non-recognition, non-aid or assistance...the same goes for private entities like businesses."

â¢ Iaian Scobbie, Professor of Public International Law, University of Manchester; suggested the Israelis are guilty of grave breaches of the Fourth Geneva Convention, which he proceeded to quote: "willful killing, torture or inhuman treatment, willfully causing great suffering or serious injury to body or health, unlawful deportation or transfer or unlawful confinement."

â¢ Chantal Meloni, Professor of International Criminal Law, University of Milan, who was also involved with the notorious Russell Tribunal for Palestine, accused Israel of being a racist state guilty of the humankind's most despicable crimes: "de facto bantustanisation of the West Bank"; "Judaisation of East Jerusalem," "war crimes and possible crimes against humanity." She said that it was "essential that Israel's crimes be heard by...the ICC (International Criminal Court.)"

Meloni openly rejected even a facade of sovereign equality: "A focus solely on the battlefield whereby both sides could be presented as bearing responsibility for international humanitarian law (IHL) violations would be misleading as it would not tackle the root cause of the conflict. That is why it is critical to include other crimes. I think in particular of the crimes of apartheid, persecutions, torture (as crimes against humanity), and of course the settlements (as a war crime)."

The Chair of the Committee, Abdou Salam Diallo from Senegal, ended the meeting with praise for the "Boycott, Divestment and Sanctions" movement. He said: "Our Committee...cannot remain indifferent to the magnitude of the public opinion, including civil society, as for example those of the campaign 'Boycott Divestment and Sanctions'. That is why we are encouraged with recent decisions of major European banks and pension funds to cease all activities with Israeli companies profiting from the settlements." Diallo also thanked all participants for their "brilliant contributions."

Representatives of the United Kingdom and Sweden took part, along with 9 members of the UN staff of the Office of the High Commissioner for Human Rights.
Date
April 25, 2014
Title
List of Participants at the “Roundtable on Legal Aspects of the Question of Palestine”
Attachment
Click here to view this document in MS Word/PDF format