Up to 40,000 Iraqis forced to choose between dying of thirst... or slaughter by extremists 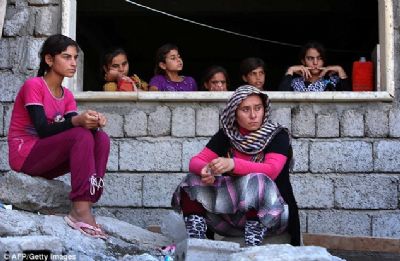 Iraqi Yazidi women who fled ISIS take refuge in the Kurdish city of Dohuk. Around 40,000 other Yazidis have been forced to the top of a mountain by the militants
"Some 40,000 Iraqi refugees face starvation after being forced into hiding on a barren mountain top by a circling band of bloodthirsty jihadists.

They must now decide whether to descend and risk being slaughtered or hope their attackers are defeated before they die of thirst or hunger, officials said.

They were driven from the town of Sinjar by ISIS over the weekend and have already been forced to bury at least 20 children who succumbed to the harsh conditions on Mount Sinjar.

Marzio Babille, the Iraq representative for the United Nations Children's Fund (UNICEF) said: 'There are children dying on the mountain, on the roads.

'There is no water, there is no vegetation, they are completely cut off and surrounded by the Islamic State. It's a disaster, a total disaster.'"
Date
August 6, 2014
Title
Up to 40,000 Iraqis forced to choose between dying of thirst… or slaughter by extremists, Daily Mail
Original Source
http://www.dailymail.co.uk/news/article-2717935/Up-40-000-Iraqis-forced-choose-dying-thirst-slaughter-extremists-Refugees-stranded-mountain-surrounded-ISIS-waiting-kill-them.html#ixzz39pHQjFPM
Attachment
Click here to view this document in MS Word/PDF format